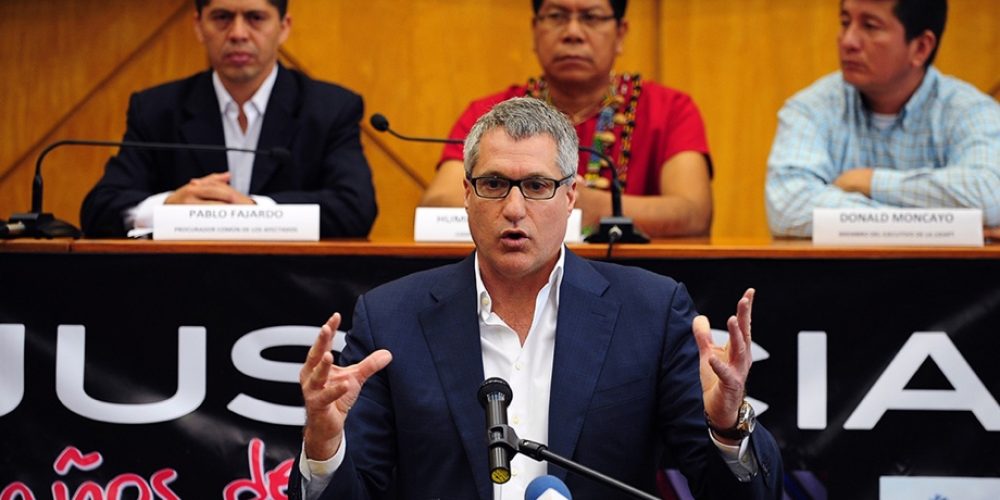 The OIAD, which gathers some forty bar associations across France, Italy, Spain, Switzerland, Belgium, Germany, Cameroon and Turkey, has decided to support lawyer Steven Donziger by nominating him for the Human Rights Award of the International Bar Association Human Rights Institute (IBAHRI).

This prize is awarded annually to a legal practitioner who, through his or her personal endeavour in the course of his/her practice, is deemed to have made an outstanding contribution to the promotion, protection and advancement of human rights of all, or any group of, people, particularly with respect to their right to live in a fair and just society under the rule of law. In 2019, two Hong Kong lawyers, Margaret Ng Ngoi-yee and Martin Lee, were honoured for their lifelong defence of freedom, democracy and the rule of law.

Steven Donziger is an American lawyer, writer, former journalist and environmental advocate currently known for leading an unrelenting legal battle against Chevron Corporation related to its contamination of the Ecuadorian rainforest.

Between the years 1964 and 1990 the oil company Texaco, whom Chevron purchased in 2000, polluted the Ecuadorian Amazonian rainforest. Up to 16 billion gallons of toxic wastewater and over 17 million gallons of crude oil were disposed of in the forest. This pollution caused many issues including health problems among indigenous peoples and communities that live in the forest.

Therefore, Steven Donziger as a human right attorney became part of the team seeking justice for the deliberate pollution of the Amazonian environment. After many years of litigation, in 2011 Steven Donziger and his team won the battle and Chevron was found guilty. The Court ordered Chevron to pay 19 billion dollars in order to clean-up. The sentence was then reduced to 9.5 billion dollars in 2013 by the Ecuadorian Supreme Court.

Chevron has since embarked on a major retaliation against the original plaintiffs and their lawyers. It has employed at least 2,000 legal professionals and investigators to block the execution of the judgment.

In 2014, Judge Kaplan ruled in favour of Chevron and convicted Steven Donziger on the grounds that the Ecuadorian judgment (which was upheld by the Ecuadorian Supreme Court) was tainted by fraud and corruption. The key witness in that trial, an Ecuadorian judge, however, admitted under oath that he had been bought by Chevron and had therefore lied in his testimony.

Steven Donziger refused to comply with the judge’s unprecedented order that would have allowed Chevron access to Donziger’s confidential client communications on his computer and phone. Judge Kaplan held him in civil contempt and then appointed a private law firm to prosecute Donziger on criminal charges. The US attorney had indeed refused to prosecute these baseless accusations. Judge Kaplan and the law firm (Seward & Kissel) he appointed are known to have ties to Chevron.

Chevron has adopted a strategy of “demonizing” the lawyer and in particular obtained in 2018 the revocation of his lawyer’s license in several American states. In September 2018, the lawyer filed a petition (request) with the Inter-American Commission on Human Rights (IACHR).

Steven Donziger has been under house arrest since August 2019. This is the longest sentence ever imposed on a New York lawyer for contempt. He has now spent more time in pretrial detention than if he had received the maximum sentence.

As announced by the IBA President, “The legal profession must be prepared to play a leading role in climate crisis”. In order for them to fully exercise their work in this kind of emblematic case of environmental defence, reprisals by multinationals against human rights lawyers must imperatively cease. Supporting Steven Donziger means encouraging lawyers to take up sensitive cases of environmental violations and violations of the rights of indigenous peoples. It also means sending a strong signal that multinationals cannot attack with impunity the human rights lawyers who carry out their work, in violation of the rules of fair trial and the Rule of Law.