Press release of the OIAD 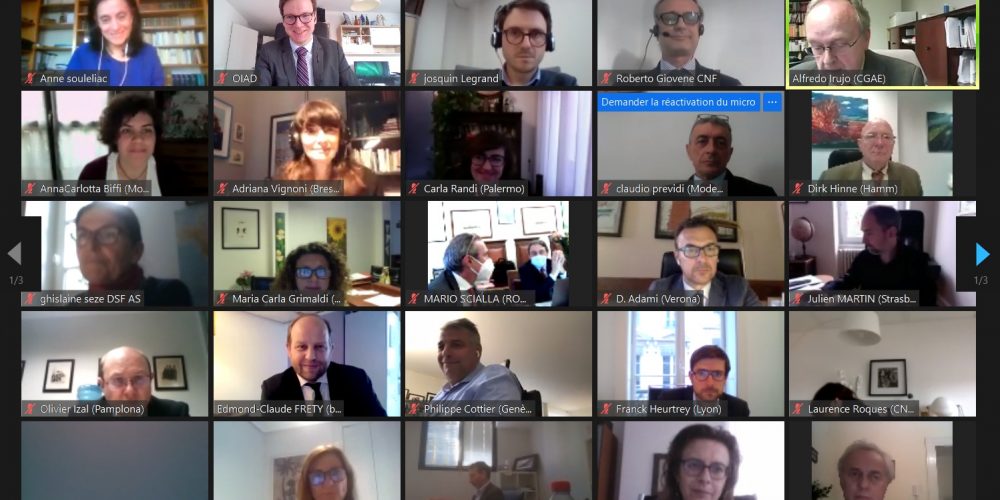 The Consiglio Nazionale Forense (Italy), with lawyer Francesco Caia, assumes the Presidency of the International Observatory for Lawyers in Danger (OIAD) for this year.

The President Victoria Ortega Benito handed over of the Presidency at the end of the General Assembly held on April 29, 2021 in accordance with the statute, which provides for the annual rotation of the Presidency among the founding members of the Observatory (Conseil National des Barreaux (France), Conseil National Forense (Italy), Consejo General de la Abogacía Española (Spain), Ordre des Avocats de Paris.

Five years have passed since the foundation of the OIAD, which main aim is to support lawyers all over the world who are threatened and persecuted by arbitrary arrests and convictions only because they are guilty of faithfully exercising the defensive mandate, in the exclusive interest of the client, without yielding to the pressures of governments and authoritarian regimes. Many are physically attacked and injured or even pay with their lives for their commitment.

Currently, more than forty bar associations, including non-Europeans, are members of the OIAD.

«I thank the President Ortega, all the board members and the active members of the OIAD for their efforts and their many actions over the past year, despite the difficulties caused by the pandemic. We will continue to support lawyers unfairly persecuted in countries where the most serious human rights violations occur – says President Francesco Caia – also through the drafting of communications and letters sent to the governments concerned, to remind them to respect the international conventions, the organisation of trial observation missions, positive actions such as assistance in the procedures for political asylum. We are aware of the need to defend the rule of law and the principles of fair trial and independence of the judiciary, of which lawyers are an essential part, now unfortunately under attack in many states.

We are grateful for the participation of the OIAD members at the General Assembly held last week. In particular of the Guatemalan lawyer Esteban Celada whose testimony inspires us to pursue the fight to protect lawyers in danger.